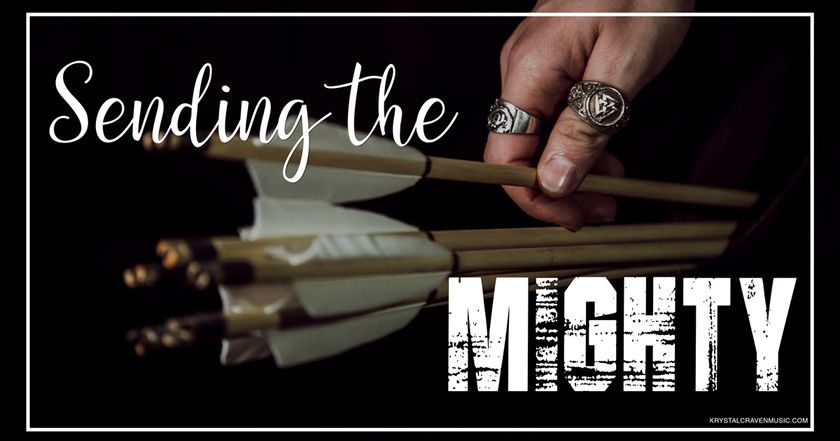 Being in the recording studio and going through the creative process was an incredible experience, one that God completely protected – as it felt like being in a bubble that the enemy wasn’t allowed to pop. Now that I’m home and the recording is all completed, but yet with more work ahead leading up to the release of this album, some feelings of doubt have come in little waves.

Don’t get me wrong, I am excited to release this and I’ve been working on it for years through ridiculous physical battles of chronic illness, in which the Lord has met me through it all, but as the release is getting closer and closer to reality the doubts have crept up. Doubts such as: What if this fails? Am I sure I heard God correctly? Did the album really turn out as good as I feel it did? Is God going to actually take me further in this music direction? Am I going to be up for whatever doors God opens?

The Lord brought me to Gideon in this, just not in the typical way we usually see this piece of history in.

As Israel was facing oppression from the Midianites, and had been for years, it had brought the people low and they called out for help to the LORD. God heard them and sent a prophet to tell them, “Thus says the LORD, the God of Israel: I led you up from Egypt and brought you out of the house of bondage. And I delivered you from the hand of the Egyptians and from the hand of all who oppressed you, and drove them out before you and gave you their land.” (Judges 6:8-9)

Pain, suffering, and oppression has a way of bringing people to their knees doesn’t it? But God had a purpose for giving Israel into the hands of Midian and it was made clear when they cried out to Him for help. They had learned surrender and dependence by what they suffered, and it softened their hard hearts to be repentant and ready for the work the Lord had prepared for their nation.

Gideon was called by God a “mighty man of valor” and told that the Lord was with him, but he too had doubts. He mentions the prophet’s words and felt like the works of old were stuck the past, wrongfully deducing that the LORD had forsaken them. And isn’t this the way our frail and sin-flawed human minds work pretty often? In our spirit we want that mustard seed faith, but in our flesh, we want to see in order to believe and we fail to hope because of our unbelief. “Immediately [he] cried out with tears and said, “I believe; help my unbelief!” (Mark 9:24)

As the angel of the LORD had come to Gideon, he didn’t greet him how Gideon saw himself or even as he currently was; he greeted him as God saw him, a mighty man of valor whom God was with. The only thing that was standing in the way of Gideon walking in that strength and valor, was Gideon. That greeting seemingly went in one ear and out the other because Gideon didn’t reply concerning himself and the attributes he’d just been described by, he went straight to the unbelief and accusing God of forsaking them.

BUT GOD, in his beautifully kind yet straight to the point manner, didn’t even entertain the false narrative that Gideon had just presented. He instead refocused Gideon on the task at hand and “the LORD turned to him and said, “Go in this might of yours and save Israel from the hand of Midian; do not I send you?” (Judges 6:14)

WOW! God already saw Gideon as equipped, knowing He would equip him, and He tells Gideon to operate in that might to save Israel. And don’t miss this… God didn’t try to reassure or convince Gideon by explaining His game plan of HOW He would use him to save Israel; God’s only provided rationale to Gideon is that HE is sending him. Isn’t that incredible?!

I know that the LORD has used my battle with chronic illness to strengthen and equip me for His purposes and my good. I honestly feel a bit sheepish that after seeing the things He’s done in my life, even just over the last year and half in which He’s miraculously healed me of many illness symptoms, that I could possibly doubt the things He has for my future. I mean I went from being a regular wheelchair user to running after He healed me last year, and yet my flesh still reared its ugly head in doubting the plans and works my Good God and Father has for me.

We don’t have to be an expert at something or have every aspect perfectly planned in order to walk in the good works God has prepared for us. Besides, if we did, they wouldn’t be the works HE prepared for us, now would they? We only have to be willing to step over our doubts and unbelief, trust that God will do as He says, and follow through with the call, simply because He has sent us.

We have two choices when faced with a call from God:

So, my friend, where is God sending YOU today and how will you choose to respond?