Now when the Pharisee who had invited him saw this, he said to himself, “If this man were a prophet, he would have known who and what sort of woman this is who is touching him, for she is a sinner.” And Jesus answering said to him, “Simon, I have something to say to you.” And he answered, “Say it, Teacher.” (Luke 7:39-40)

Isn’t it interesting that it says the Pharisee said to himself – referring to that internal dialogue we have with ourselves, and yet Jesus answered him directly. Jesus didn’t come right out and say, “Look dude, I know what you’re thinking” but His response spoke directly to the heart of the matter.

“A certain moneylender had two debtors. One owed five hundred denarii, and the other fifty. When they could not pay, he cancelled the debt of both. Now which of them will love him more?” Simon answered, “The one, I suppose, for whom he cancelled the larger debt.” And he said to him, “You have judged rightly.” (Luke 7:41-43)

Then turning toward the woman he said to Simon, “Do you see this woman? I entered your house; you gave me no water for my feet, but she has wet my feet with her tears and wiped them with her hair. You gave me no kiss, but from the time I came in she has not ceased to kiss my feet. You did not anoint my head with oil, but she has anointed my feet with ointment. Therefore I tell you, her sins, which are many, are forgiven—for she loved much. But he who is forgiven little, loves little.” (Luke 7:44-47)

Simon had not only missed seeing the repentant heart and the love this woman had for Jesus through her actions, but he also had even misjudged Jesus' prophetic ability to know what sort of woman this was. The thing was, Jesus hadn’t failed to know what sort of woman she was. He knew she was a sinner, but His love for her was greater still, and His acceptance of her worship speaks volumes.

She also didn’t try to hide who she was or her past from Jesus, she came as she was. And Jesus is willing to look past our past and the past of others when we/they come with repentant hearts seeking forgiveness.

As followers of Jesus, saved by grace through faith, we have been forgiven of ALL our sins and we don’t have to worry about the misplaced judgement of others towards us. We are a work in progress, and we know the Author and Finisher of our faith is faithful to complete the good work He has started in us. And this also rings just as true to our other siblings in Christ.

Do you allow your siblings in Christ the opportunity to show the fruit of their repentance, being patient as it grows, and then accept it as fruit instead of judging in a condemning way as if their fruit is somehow not good enough? The Pharisee Simon was witnessing fruit of repentance in this woman, and an adoration and love for Jesus that was bold. Yet he defined her by her past and therefore disregarded the fruit that was evidenced.

𝗘𝘃𝗲𝗿𝘆𝗼𝗻𝗲’𝘀 𝗳𝗿𝘂𝗶𝘁 𝗺𝗮𝘁𝘂𝗿𝗲𝘀 𝗮𝘁 𝗱𝗶𝗳𝗳𝗲𝗿𝗲𝗻𝘁 𝗿𝗮𝘁𝗲𝘀, 𝗯𝘂𝘁 𝘄𝗲 𝘀𝗵𝗼𝘂𝗹𝗱 𝗻𝗲𝘃𝗲𝗿 𝗱𝗶𝘀𝗿𝗲𝗴𝗮𝗿𝗱 𝗼𝘂𝗿 𝘀𝗶𝗯𝗹𝗶𝗻𝗴 𝗶𝗻 𝗖𝗵𝗿𝗶𝘀𝘁’𝘀 𝗳𝗿𝘂𝗶𝘁 𝘀𝗶𝗺𝗽𝗹𝘆 𝗯𝗲𝗰𝗮𝘂𝘀𝗲 𝗼𝗳 𝘁𝗵𝗲𝗶𝗿 𝗽𝗮𝘀𝘁 𝘀𝗶𝗻𝘀. Your past does not define you and neither does it define anyone else. A person is either in Christ, in which there is no condemnation, and they identify with His death, burial, and resurrection OR they are in need of Jesus as Savior in which to be cleansed and find their identity in. If they are not yet saved, judging and defining them by their sins isn’t going to lead them to repentance – it’s God’s kindness that does that.

If you’re guilty of defining people by their past, no matter how recent, today’s the day to repent of this yourself and ask God to give you a perspective like His for people. 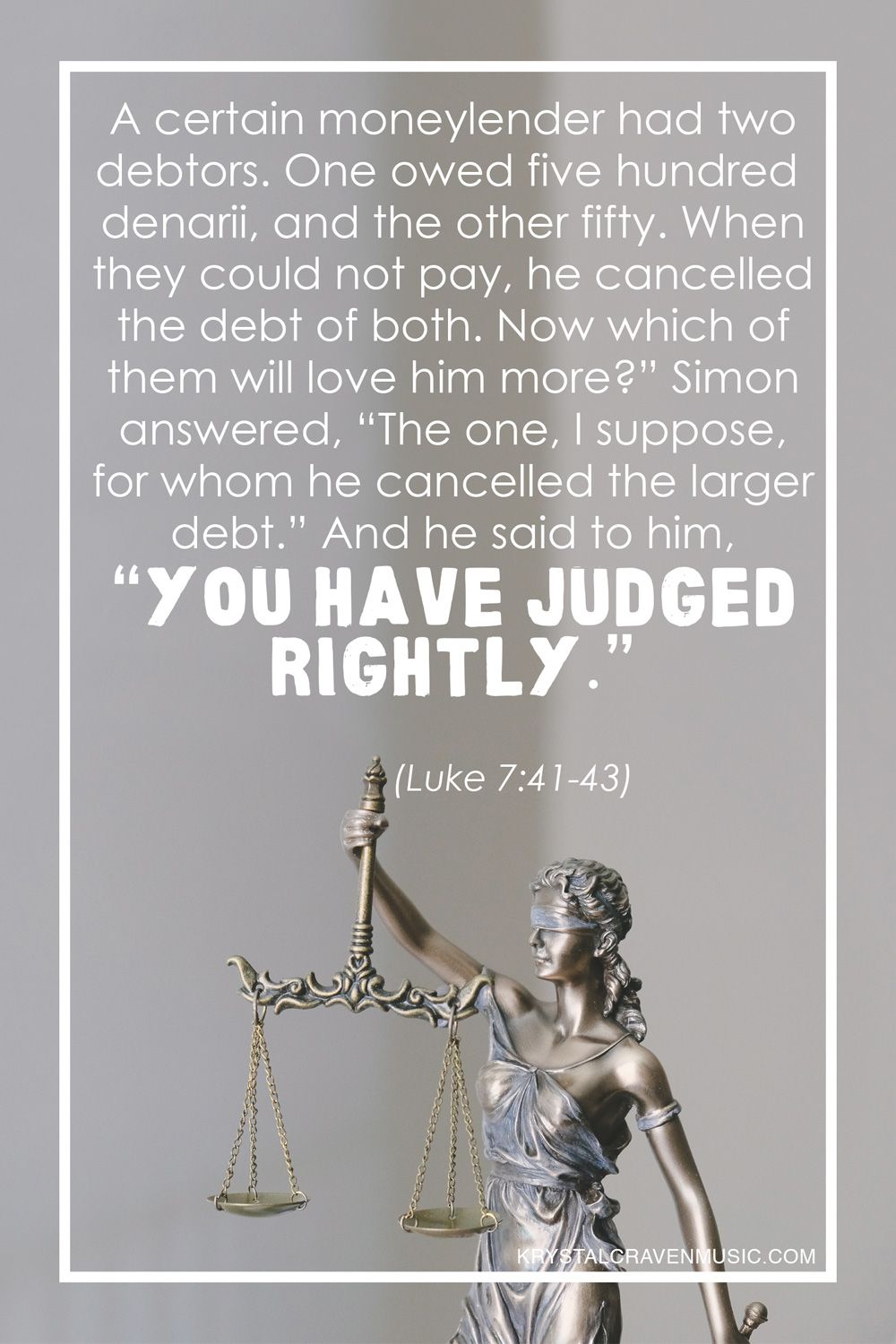