Therefore I tell you, her sins, which are many, are forgiven—for she loved much. But he who is forgiven little, loves little.” And he said to her, “Your sins are forgiven.” Then those who were at table with him began to say among themselves, “Who is this, who even forgives sins?” And he said to the woman, “Your faith has saved you; go in peace.” (Luke 7:47-50)

Jesus had just told Simon the Pharisee about a moneylender who had cancelled the debts of two people, one large debt and the other a small debt. The Pharisee rightly judged that the one forgiven the larger debt would love the moneylender more – yet he hadn’t judged the woman rightly. He had been blinded to the fact that this “woman of the city”, a sinner, realized her state and humbly had come and washed the feet of Jesus with her tears and anointed Him with ointment. Then Jesus does something incredible – He publicly forgives the woman’s sins!

This woman had many sins. Honestly, we all do, but hers were very publicly transparent. And yet when she humbled herself in the sight of God, He forgave her and lifted her up in the presence of influential people.

A thing to notice is that Jesus didn’t just once say that her sins were forgiven, but He said it once in referring to her, once directly to her, and again in mentioning that her faith had saved her. It wasn’t a slip of the tongue, it wasn’t a misunderstood referencing, Jesus had forgiven her, and she and everyone present heard it.

Of course, at this time the apostle Paul hadn’t been converted yet and hadn’t written the letters to the churches yet. However, now that we have the entire cannon of Scripture, it just provides more proof that the Bible is the breath of God, divinely inspired by the Holy Spirit, and although written by many men still only authored by One. The Author Himself spoke the truth that Paul would later speaks of in his letters, “Your faith has saved you”.

Lastly, Jesus tells her to go in peace. We can’t have peace apart from God and previously, this woman was separated from God by her sin. Now that she had been forgiven of her sins, she is able to go in peace. However, do you think she would have realized this if Jesus had not told her?

So often, even once we are forgiven our sins can seem to haunt us, and it only robs us of peace and from growing in our relationship with Jesus. Yes, we don’t magically forget our past when we are forgiven, but it doesn’t have to weigh us down anymore. We can have true peace from the Prince of Peace once that burden of sin has been lifted from off our shoulders.

Are any past sins keeping you from going in peace? Come to Jesus, humbly bowing at His feet, and remember again His work on the cross, and that His forgiveness of your sins is complete. May your past sins never weigh you down again and may the vastness of them only ever serve as a remembrance of the even more vastness of God’s grace and forgiveness, so that you may love Him much and go in peace! 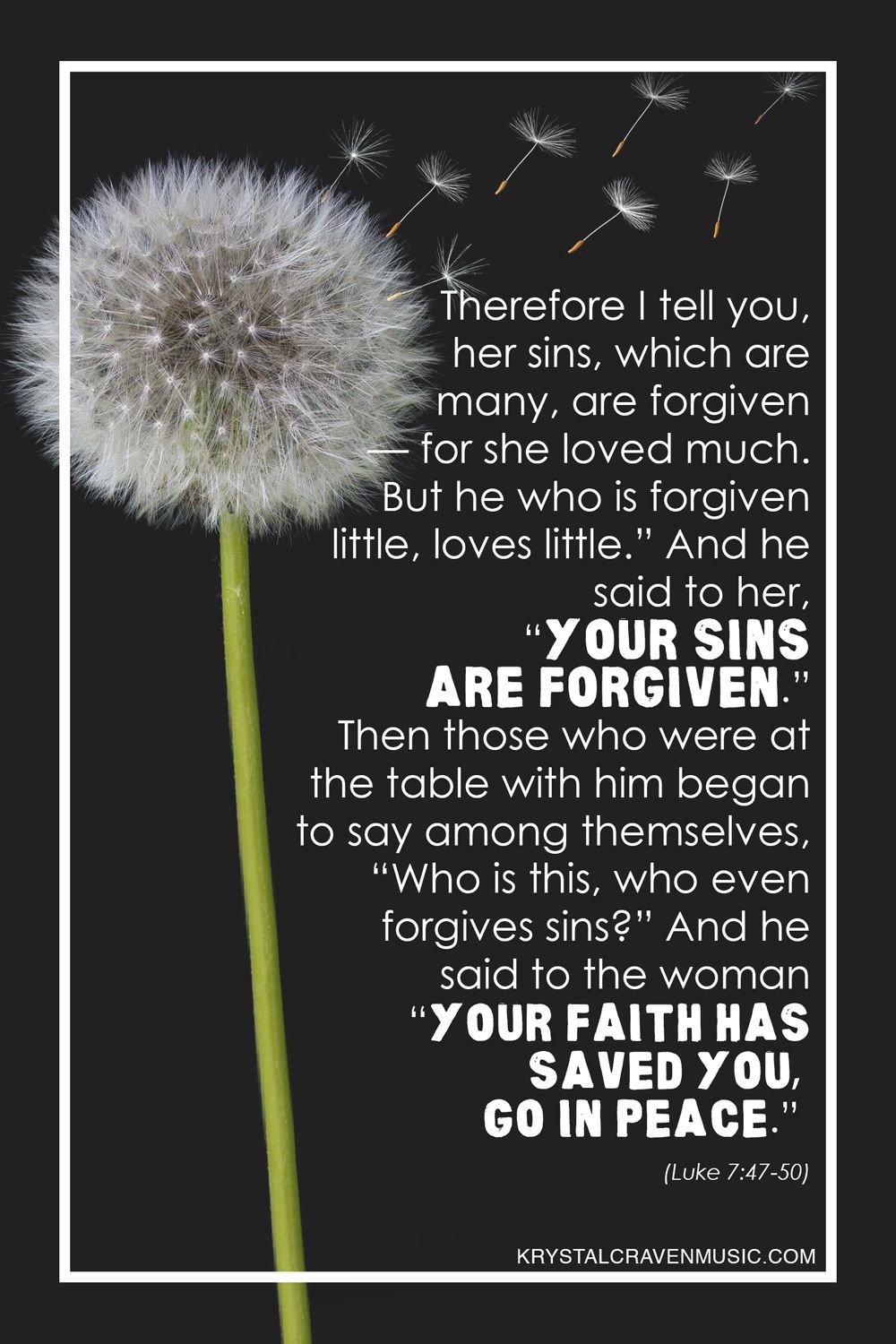