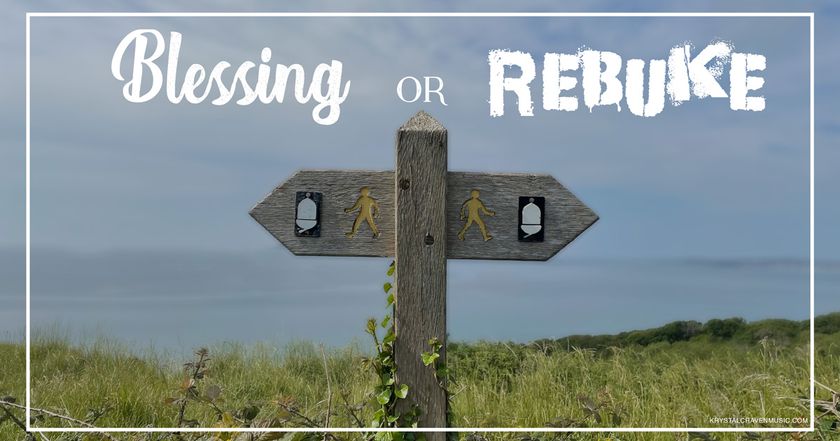 In Matthew 16, right after Peter confesses that Jesus is the Messiah, the Son of the living God, Jesus says to him, “Blessed are you, Simon Bar-Jonah! For flesh and blood has not revealed this to you, but my Father who is in heaven.” (Matthew 16:17) Yet in the very next section as Jesus tells His disciples that He must go to Jerusalem and suffer many things, be killed, and raised on the third day, we see a completely different interaction between Peter and Jesus:

“And Peter took him aside and began to rebuke him, saying, “Far be it from you, Lord! This shall never happen to you.” But he turned and said to Peter, “Get behind me, satan! You are a hindrance to me. For you are not setting your mind on the things of God, but on the things of man.”’ (Matthew 16:22-23)

How did Peter go from receiving a response from Jesus of blessing to a rebuke? Simply put, as Jesus stated, Peter was setting his mind on the things of man, not God.

It was when Peter was focused on Jesus, and who He was, that he received a blessing from Jesus. As Peter lost focus of the spiritual while Jesus talked about His pending suffering, death, and resurrection, he sowed to his carnal thinking and as his speech came forth, he reaped a rebuke from Jesus and was even found to be hindrance to God. How can we live our life in order to please Jesus and avoid receiving such rebukes and not be hindrances to God?

In Ephesians, we are clearly told that “we do not wrestle against flesh and blood, but against the rulers, against the authorities, against the cosmic powers over this present darkness, against the spiritual forces of evil in the heavenly places.” (Ephesians 6:12) and this is why we must take up our spiritual armor of God, that we may be able to withstand in the evil day and stand firm. We cannot go throughout life only seeing and sowing to the temporal and expect to reap blessings in the spiritual.

Whether we’re taking the time to perceive the spiritual battles raging around us or not makes no difference to the fact that it is indeed going on. The only difference is whether we’re fighting on the right side with the proper armor or being used by the enemy as hindrances to God. If we are taking up the whole armor of God, we’re fighting as part of God’s army in an effective manner. If we’re not, then because of our flesh nature, we’re inevitably fighting a spiritual battle in the physical and inevitably helping the enemy’s cause.

In today’s day and age, the physical conflict has been around things such as masks, vaccines, and political affiliation, but those things are not merely physical, there is a whole spiritual side to it and a very real battle is waged between light and darkness. In the physical, it may appear to only be about a pandemic and political agendas, but in the spiritual, it is still very much so about isolating the Church, sowing division amongst the body of Christ, and tarnishing a Christian’s witness to reduce the effectiveness of our light in this dark world.

“Consider how precious a soul must be when both God and the devil are after it.” (Charles Spurgeon)

We know how precious God deems every human soul because He gave us the entire Bible revealing His steadfast love towards us and His foundational plan to redeem us by the blood of Jesus. But have you ever wondered why the devil is after souls too? The devil wants to hurt God and take His reward in which He paid His own blood to redeem, which is our souls. His way of doing that is trying to prevent the gospel from being shared, making the Church so busy with division or caught up in the things of man that they aren’t storming the gates of hell, and by trying to steal the seeds that are being planted.

We see how we can learn from Peter’s success and failure, but let’s not miss what can be gleaned from Jesus’ response itself. He blessed AND He rebuked, and we know He did it without sinning and with kind and compassionate intentions. We can’t neglect to speak both blessings and rebukes in season, as the Holy Spirit gives us utterances.

When Jesus said, “Get behind me, satan! You are a hindrance to me”, I don’t believe He was actually calling Peter satan. I believe He was speaking beyond the physical, which was Peter, and to the source of Peter’s rebuke, which was from the devil. Jesus didn’t try to reason with Peter’s rebuke or defend His position of the mission His Father sent Him on. Jesus simply met rebuke with rebuke and although it played out in the physical, it was very much so a spiritual battle. We can take a stand and be bold in Christ without struggling against people. If we struggle against people and get wrapped up in the things of man, we not only risk turning them away from Christ, but we waste our time better spent on the Father’s business. We are to boldly speak the truth in love, but to engage in dissention is not profitable to either party involved.

I encourage you to spend time in prayer and consider what things in your own life you may need to change in order to ensure you’re fighting spiritual battles and not picking or engaging in temporal ones that struggle against flesh and blood, of whom Jesus died to redeem.