Blessed are the Hated 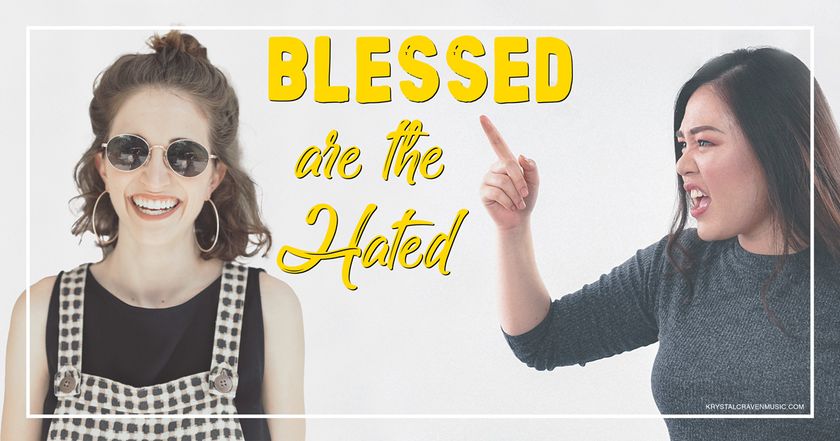 Blessed are you when people hate you and when they exclude you and revile you and spurn your name as evil, on account of the Son of Man! Rejoice in that day, and leap for joy, for behold, your reward is great in heaven; for so their fathers did to the prophets. (Luke 6:22-23)

As we wrap up the last Beatitude, it is a beautiful encouragement in light of what every follower of Jesus will face. We know that as followers of Jesus we will have tribulation, just as Jesus and Paul stated very clearly.

I have said these things to you, that in me you may have peace. In the world you will have tribulation. But take heart; I have overcome the world. (John 16:33)

Indeed, all who desire to live a godly life in Christ Jesus will be persecuted (2 Timothy 3:12)

However, Jesus said He has overcome the world and in Him, we will too.

It may seem odd and oxymoronic that one will be blessed, let alone should rejoice and leap for joy when people hate, exclude, revile, and spurn your name as evil, but when we really dig into this, we see how that is exactly the perfect response.

In the English language, we have some words that just don’t quite have the same meaning as a word translated from the Greek. The word “love” is a great example of this because in English we have one word and it can mean so many different things depending on context. Yet in the Greek, there are four different words for love and they all have their own contextual use. In a similar way, here’s what some of the words in the Greek mean:

Seeing the meaning come through from the Greek word origin doesn’t make it sound any better, it actually makes for better understanding that Jesus is literally saying you’re blessed when people hate you so much for being a Christian that they persecute you; that because you follow Christ they don’t want you to follow anywhere near them; they defame and taunt you because you’re a Christian, and all because you claim the Name of Christ they single you out and claim that you’re a malicious and hurtful influence to society at large.

However, Jesus explains how one is blessed when this happens and how we should respond: REJOICE and leap for joy! This phrase “leap for joy” is the same used when describing how John the Baptist leaped in Elizabeth’s womb upon hearing the greeting of Mary (the mother of Jesus). He leaped as the mother of his Lord came near and greeted his mom with his Lord in her womb, and we are to leap for joy because our reward is great in heaven.

That word for reward literally means pay for service or wages. So when we’re being hated, excluded, reviled, and spurned on account of Jesus, it’s because we’re actively working and doing things for the Kingdom of God, and for that work we will be rewarded in heaven. It doesn’t matter what men can do to us, because it’s God who has given us eternal life and Who will reward us for the work we’ve done for Him.

Your Reward is Great

At the end of the apostle Paul’s life, he wrote to Timothy, “I have fought the good fight, I have finished the race, I have kept the faith. Henceforth there is laid up for me the crown of righteousness, which the Lord, the righteous judge, will award to me on that day, and not only to me but also to all who have loved his appearing.” (2 Timothy 4:7-8)

John Trapp, in his commentary, wrote examples of men who rejoiced at persecution as they faced their execution on account of Jesus and this is one of the men he wrote of:

“Doctor Taylor leapt and danced a little as he came to his execution, saying when asked how he was, “Well, God be praised, good Master Sheriff, never better; for now I am almost home…I am even at my Father’s house.” (Trapp)

Could you imagine leaping and having joy as you make your way to your own execution? I imagine such people who have faced this situation and done well until the end didn’t get to that response without having spent much time with Jesus Himself on a daily basis.

God knows we as humans need to have things to look forward to, that help push us forward and motivate us to keep strong and endure, and our loving Father has promised us rewards in heaven – things far better than we can even imagine. We know that if we follow Jesus we will face persecution of varying kinds, and the way to be better off and happier through it is by rejoicing in the remembrance of the great reward that awaits us in heaven.

When you face persecution, remember the reward in which you’ll reap, then rejoice and leap!